“Asking for It” is packed with familiar faces, timely messages, and righteous fervor, Eamon O'Rourke's kinetic directorial debut – created in partnership with Clemons"

Asking for It Parents guide

Asking for It is a thriller drama movie that is written and directed by Eamon O’Rourke. “Asking For It” makes its world premiere at the 2021 Tribeca Film Festival. This movie was Produced by Kiersey Clemons, Lee Broda, Ezra Miller, and Luke Daniels. The Production Companies of Asking for It are Redwire Pictures, Tunnel Post, and LB Entertainment, distributed by Saban Films and Paramount Home Entertainment.

Asking for It Release Date

Asking for It is expected to be released on March 4, 2022 (United states)

What does “Asking for It” is it about?

This movie revolves around The Cherry Bombers, a femme gang. After small-town waitress Joey is sexually assaulted after a date with her old friend Mike, she makes a mysterious stranger Regina her friend. Regina introduces her to The Cherry Bombers, a femme gang that includes Beatrice, Lily, Sal, Jett, Angie, Fala, and Rudy.
All were suffering from past traumas, together they fight a misogynistic society by targeting violent frat boys, a corrupt police force of human traffickers led by Sheriff Morel, and the dangerous alt-right group MFM (Men’s First Movement) headed by Mark Vanderhill. As Joey is drawn further into their chaotic world, Sal’s old flame, Logan County Sheriff Vernon investigates MFM which leads to a thrilling showdown.

Asking for It Parents Guide

Asking for It Age Rating

Asking for It has been rated R for disturbing and violent content, sexual material, nudity, and language throughout.

Why Asking for It is R-rated?

Asking for It Wallpaper and Images

Who is in the cast of Asking for It?

Asking for It Official Trailer 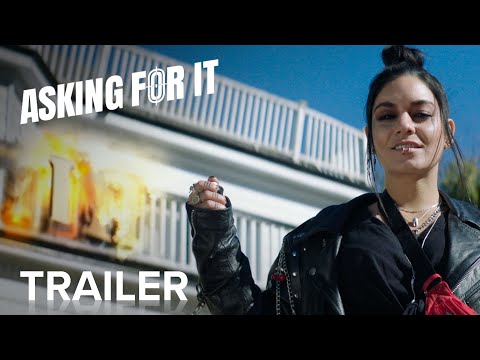 Know about asking for It Parents Guide. Why does Asking for It to receive this age rating? Read the complete information here about Asking for It ratings in the UK, US, Australia, Canada, Ireland, Switzerland, and overseas.