Winx Club is an American animated television series created and directed by Iginio Straffi. The show is set in a magical universe that is inhabited by fairies, witches, and other mythical creatures.

TV-Series Winx Club is Rated TV-Y7 for Cartoonish Violence and Language Throughout.

In this series, witches and warriors begin fighting in the name of good vs. evil. A group of five teenaged girls was chosen to defend the universe with their magical powers. The Winx Club must defend its universe from having it be turned into darkness and terror by the Senior Witches.

Season 1: In the first season, a 16-year-old girl named Bloom from Earth discovers she has magical abilities along with her newfound friend Stella. Bloom meets her apartment roommates Flora, Musa, and Tecna. Together, they form the Winx Club. During their adventures, they become good friends and get to know some of the boys from another school called Red Fountain.

Season 2: The second season follows the Winx Club’s second year at the Alfea College for Fairies, where they strive to earn an enhancement to their powers called Charmix. A new member of the Winx Club is introduced in the season’s first episode. Meanwhile, the Trix are freed from their prison by Darkar, who becomes their leader.

Season 3: The third season focuses on the Winx Club’s third and final year at the Alfea College for Fairies, where they strive to earn an enhancement to their powers called Enchantix. The Trix escape from their prison in the Omega Dimension and bring back a new villain, who has a special connection with Bloom.

Season 4: The fourth season takes place a year after the events of the previous season and the feature film Winx Club: The Secret of the Lost Kingdom. The Winx Club fairies travel to Earth to protect its last terrestrial fairy from the four Wizards of the Black Circle. They also evolve their magic powers to Believix.

Season 5: In the fifth season, the Winx face a threat underwater and will have to face a new dreadful villain, Tritannus. He was a normal triton who was mutated into a powerful demon caused by pollution. His main goal is to become the emperor of the Infinite Ocean. The Believix power is not strong enough underwater, so the Winx start a challenging quest to get the ancient Sirenix power and become ocean fairies.

Season 6: The sixth season focuses mainly on a young witch from Earth who has just enrolled at Cloud Tower as a freshman student, and who is an old childhood best friend of Bloom’s. The Winx must earn two new fairy transformations that are Bloomix and Mythix to lock the Legendarium once and for all. In order to do so, they must also find Eldora, the fairy godmother, who, like Bloom, has quite a close connection with Selina.

Season 7: The seventh season carries on the theme of recent Winx releases by carrying a strong environmental message. In this adventure, the fairies discover the real importance of the rare Fairy Animals, which they must save from Kalshara, an evil shape-shifter, and her clumsy brother, Brafilius. The girls also undertake missions in the Magic Dimension and Earth to raise public awareness about the animal cause.

Season 8: The eighth season appealed to a preschool target audience, and it is only loosely connected to the rest of the series. The creative team at Rainbow SpA restyled the characters to appear younger, and the plotlines were simplified. Most of the show’s longtime crew members were not called back to work on this season, including art director Simone Borselli, who had designed the series’ characters from season 1 to 7, and singer Elisa Rosselli, who had performed a majority of the songs. 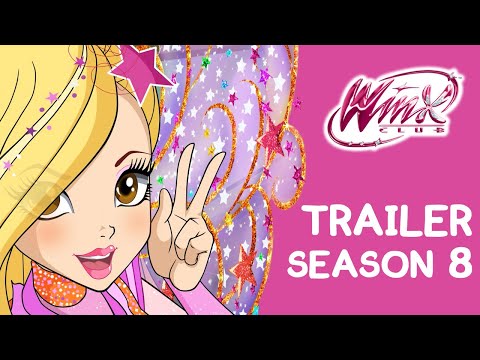 TV-Series Winx Club is rated T in Italy, 6 in the Netherlands, PG-13 in the Philippines, M18 in Singapore, PG in the United Kingdom, TV-Y7 in the United States.