The new series from DreamWorks follows four young friends using their special skills to distract people while they do good deeds.

Team Zenko Go is a new animated children’s show coming to Netflix in March 2022 focusing on the concept that “no good deed is too small,”. In this article below, you will get to know Team Zenko Go Age rating and Team Zenko Go parents guide, release date, cast.

Before letting your kids watch the show it is important for the parents to read about Team Zenko Go Age Rating and Team Zenko Go to know more about the shown content in the show, keep reading the article.

Team Zenko Go Release Date: Season 1 of Team Zenko Go! drops on Netflix on Tuesday, March 15.
Note! If you have already watched the show, please inform us about the parental guidance here. With your support, we can bring out a better vision to everyone.

No good deed is too small for this kind kid squad. Niah, Ari, Ellie and Jax go undercover to help others and squash their town’s problems in secret.

TV G-rated programs are for General Audiences — all ages admitted, meaning there is nothing in theme, language, nudity, sex, violence or other matters that the rating board thinks would offend parents whose younger children view the picture.

In the trailer of Team Zenko Go!, Auntie Yuki calls the team together for Mission Mode. She needs Niah, Ari, Ellie, and Jax to go into stealth mode in order to help the citizens of Harmony Harbor. When Auntie Yuki sounds the gong, essentially their version of the Bat-signal, the team rushes to mission control (which appears to be a food truck that springs to life when the team arrives) to find out who needs help.

A young girl named Lulu needs help presenting a comic book at her book club. Her comic book goes missing, and Team Zenko, which is a Japanese word meaning good deed, is in charge of finding it for her. Without her knowing, of course, because as Aunti Yuki reminds them, “the best eZnkos are the ones nobody knows.” 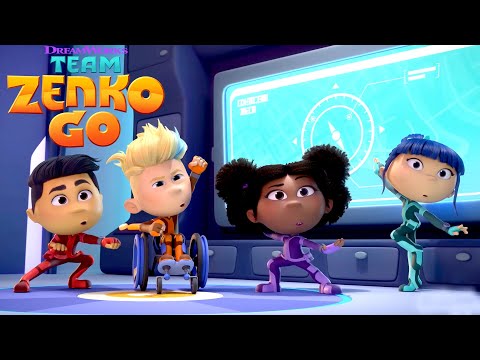