The Movie Jackass Forever is rated R for strong crude material and dangerous stunts, graphic nudity, and language throughout.

The movie Jackass Forever is scheduled to be released on 04 February 2022 (USA).

Through the trailer, we get to have a little look at the extremely dangerous pranks that the crew would be played upon. The image of Johnny Knoxville being fired out of the canon with wings like an angel certainly flies up to our expectations as well. The new trailer shows us the crew getting slapped, punched, and fired up, explosions in the toilet, electric wires stuck to the genitals, tarantulas around the face, venomous snakes on the nose, and last but not the least, it shows us never to trust their coffee place. (Watcht the trailer below)

Jackass Forever: After 11 years, the original cast comes together for the last time.

Jackass Forever is going to be the last and the ‘gnarliest’ of the Jackass film series. The crew has certainly grown older but the creative shit has not!  Although understanding the limitations of the body that comes with age, Knoxville had said “you can only take so many chances before something irreversible happens.” and hence it’s the original crew’s last stunt before they retire.

Just like the tv show and prior films, Jackass forever would have as its director, producer, and writer as Jeff Tremaine. The tradition also continues with writer Spike Jonze, photographer and co-producer Sean Cliver, and camera operators Lance Bangs and Rick Kosick.

Other members of the original crew include Chris Pontius, Dave England, Wee Man, Danger Ehren, and Preston Lacy. We won’t be able to see Bam Margera because of some issues during production. There would also be guest appearances by celebrities like Eric André, Tory Belleci, Shaquille O’Neal, Tony Hawk, and others. Unfortunately, for the first time, Rip Taylor won’t be a guest star as he died in 2019. 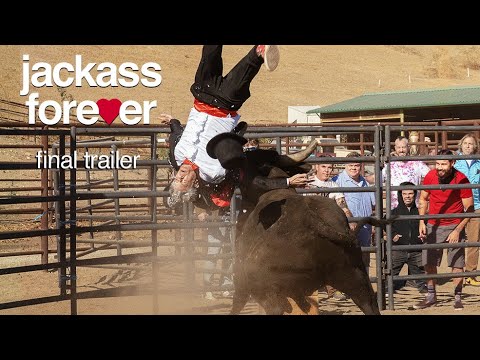 The movie Jackass Forever is rated R13 in New Zealand, R in the United States.

Everything Everywhere All at Once (2022)