The Neighborhood is an American sitcom television series created by Jim Reynolds and produced by Patrick Kienlen.

The series follows a white Midwestern family as they adjust to moving into a black neighborhood in Pasadena, California.

The series is distributed by CBS Media Ventures. However, the production companies are A Bird and a Bear Entertainment, Kapital Entertainment, Trill Television, CBS Studios.

TV-Series The Neighborhood is rated TV-PG for Language Throughout.

Why TV-Series The Neighborhood is rated TV-PG ?

Season 4 of TV-Series The Neighborhood is scheduled to be released on 20 September 2021.

The Neighborhood
Note! If you already watched the Series, please inform us about the parental guidance here with your support, we can bring out a better vision to everyone.

In this series, The friendliest guy in the Midwest moves his family to a neighborhood in Los Angeles where not everyone looks like him or appreciates his extreme neighborliness. Dave Johnson is a good-natured, professional conflict negotiator.

When his wife, Gemma, gets a job as a school principal in Los Angeles, they move from Michigan with their young son, unfazed that their new dream home is located in a community quite different from their small town. Their opinionated next-door neighbor, Calvin Butler, is wary of the newcomers, certain that the Johnsons will disrupt the culture on the block.

However, Calvin’s gracious wife rolls out the welcome wagon their chipper younger son thinks the Johnsons could be good for the community, and their unemployed older son finds Dave may finally be someone who understands him. Dave realizes that fitting into their new community is more complex than he expected.

The Neighborhood Wallpaper and Image 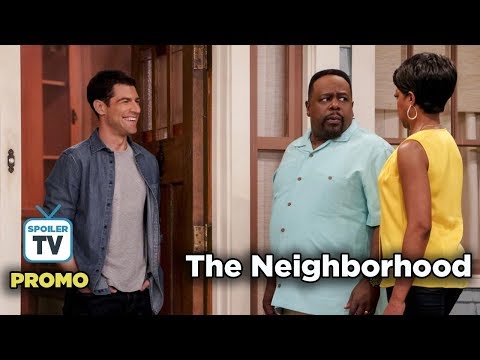 TV-Series The Neighborhood is rated PG in Australia, 10 in Brazil, TV-PG in the United States.

TV-Series The Neighborhood is rated TV-PG.