"Grumpy ghost named Scratch is eternally cursed to be in the presence of polar opposite Molly McGee, a cheerful tween"

The Ghost and Molly McGee Parents guide and Age Rating

It was scheduled to be released on October 1, 2021, by Disney Channel.

Tween optimist Molly McGee lives to make the world a better place, fix what has gone wrong, and spread joy. Meanwhile, cantankerous ghost Scratch lives to make the world a worse place, break what has gone right, and spread misery. When a curse from Scratch backfires, he finds himself forever bound to Molly. Despite that, Scratch and Molly form an unlikely friendship that guides each of them through the ups and downs of their respective worlds.

TV-Y7  rated means directed toward kids 7 years and older (kids who are able to distinguish between make-believe and reality); may contain “mild fantasy violence or comedic violence” that may scare younger kids.

The Ghost and Molly McGee Wallpaper and Images

Who is in the voice cast of The Ghost and Molly McGee? 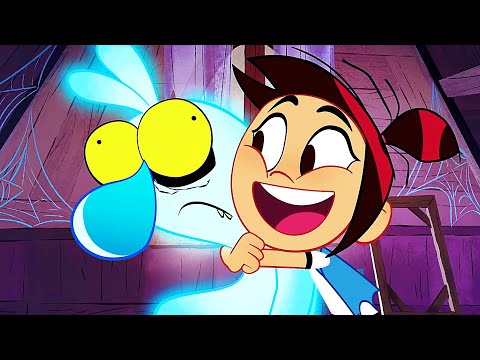 The Ghost and Molly McGee is rated 6 in the Netherlands, 6+ in Russia, Pg-13 in Singapore, TP in Spain, and TV-Y7 in the United States:

The Ghost and Molly McGee