The series is directed by Naokatsu Tsuda and Kenichi Suzuki, and the series is produced by David Production, also the anime television series is created by Hirohiko Araki and distributed by Netflix.

Program Rated TV-MA should be viewed by mature and adult audiences only and it may be not suitable for children under 17.

Stone Oceanis scheduled to be released as an original net animation season on Netflix in December 2021.

JoJo's Bizarre Adventure (2021 TV-Series)
Note! If you already watched the series, please inform us about the parental guidance here with your support, we can bring out a better vision to everyone.

Dio Brando was born into poverty In 19th-century England, and he was adopted by George Joestar to repay a family debt to Dio’s father Dario. His father died in 1880. Dio made a plan to take the Joestar fortune for himself so he manipulates Jonathan Joestar. But Jonathan wins the battle with Dio.

For seeking revenge Dio murdered Jonathan’s pet dog, Danny. In the battle Dio’s blood being spilled in a mysterious stone mask and it reacted with his blood. That mask was used by the Aztecs to bring the wearer immortality Jonathan and Dio develop an interest in that mask.

The vampire enemy of Jonathan Joestar that has possessed Jonathan’s body, emerges from the bottom of the Atlantic Ocean. As DIO develops a manifestation of life energy known as a Stand, Jonathan’s descendants Joseph Joestar, Jotaro Kujo, and Holly Kujo also gain Stands.

The group is joined by Jean Pierre Polnareff, a former assassin of DIO who discovers that DIO is employing the murderer of Polnareff’s sister, along with the Stand user dog Iggy, aided by Kakyoin, who reveals the nature of DIO’s time-stopping Stand The World in his last moments, Jotaro kills DIO in Egypt, allowing Holly to recover.

Jotaro Kujo tracks down the illegitimate son of Joseph Joestar, to help him find a magical bow and arrow which grants people Stand powers. Along the way, Josuke and his friends discover that a Stand-using serial killer is on the loose in their hometown of Morioh and they set out to stop him.

Two years after the events of Diamond is Unbreakable, Koichi Hirose is sent to Italy and tasked by Jotaro Kujo to search for Giorno Giovanna, an aspiring mafia gangster who is a son of Dio Brando. But as Dio possessed the body of Jonathan Joestar at the time of his conception, Giorno is technically a Joestar and takes more after them than the father he never knew, despite his blond hair. 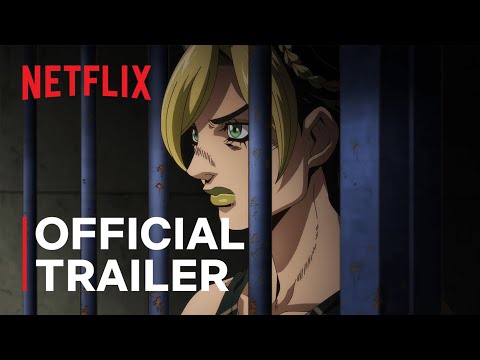 JoJo’s Bizarre Adventure is rated MA15+ in Australia, R-16 in Phillippines, 16+ in Russia, M18 in Singapore, 15 in the United Kingdom, TV-MA in the United States.