He’s All That Parents Guide

He’s All That is an upcoming American teen romantic comedy film directed by Mark Waters, from a screenplay by R. Lee Fleming and produced by Jennifer Gibgot, Andrew Panay.

He’s All That Age Rating

He’s All That, age rating is TV-MA for the content shown in the movie.

He’s All That Parents Guide

He's All That Includes

He’s All That Release date

The movie He’s All That is scheduled to be released on 27 August 2021.

He's All That
Note! If you already watched the Movie, please inform us about the parental guidance here with your support, we can bring out a better vision to everyone.

Film He’s All That Overview

It starts with a scene where we can see a room all colored in pink then the movie heroine wakes up and starts doing her makeover Padgett Sawyer, a tik tok star who teaches her followers to do their makeup. At first, she tells everyone about her day and then gives some tips to do the makeover where she endorses her products as well. After her work is done and she’s about to leave, when she meets her mom who is a nurse, and tells about all the patients in her shift, Padgett gets a check of sponsorship for three thousand dollars which she uses in her college and home expenses.

Which tells they don’t have much to spend and her mother wants her to study in a good college that’s why they both are very hardworking, and then Padgett leaves and goes a long way hiding from others and to pick her both her friends arrive their names are Alden and Quinn. And from there they were about to go on her boyfriend Jordan’s shoot, Padgett even cooks a cake for him. Jordan is a very famous singer.

On the other hand, we see Brin watching one of the Jordan videos who is along with her brother Cameron and they were on their way to school. Cameron doesn’t like all this and tells him that Jordan and Brin study in the same school. Jordan says all this noise doesn’t bother him.

Then they arrive at the school where the whole school was talking about the prom night, there Cameron was talking with his friend Nisha and both of them were decides to go on a trip together, he tells that he wanted to go all around the world and likes karate movies, and he listens to soft music, then Cameron makes fun of her sister which irritates and then he tells about his further plans to Nisha.

Whereas Padgett Alden and Quinn reach the shooting site and Padgett was live on her tik tok and gives her phone to Alden and says that they are going in, and when they all go in Jordan was having fun with a girl name Aniston, after watching this Padgett gets angry and then throw the pieces of cake she made on Jordan. All this happens while she was alive, all this was seen by all his followers, right then Quinn tells that Padgett is live so she drops the phone.

Then she goes online and sees that her video is viral on the internet, through her meltdown is now messy reality influencers are not allowed to have and started losing followers. Then she receives a call from Jesica who tells that her image is now ruined and now she’s not a brand ambassador anymore and if she wanted to work again with them so she has to recreate her makeover personality that now has been tarnished, Padgett asks for a chance for which Jessica advises her to improve her image and disconnects the call.

Later when she goes to school she sees Alden and Quinn talking, Alden says it’s the price one has to pay for a celeb for this long time. Here comes Padgett where everyone is fond of Jordan and Padgett is upset about this, and they talk about how stupid Jordan use to be in his early days, while Padgett says it was me who made him like this. Alden suggests she find another guy, and there’s the announcement for the prom night.

Where Padgett says she’ll find a new guy for her prom king, here Alder challenges her and says to work over an idiot, Padgett agrees, she thinks because of this she’ll be famous again and her fallen image will rise again. Then they all go to find a loser, where at first they see a goon, then a nerd and after looking at many boys they find Cameron who was picturizing and Alden like him, and she thinks there must be something between Camron and Nisha.

Quinn says that Nisha is a lesbian there Padget decides to work on Cameron, that’s when Jordan throws trash on Cameron, so Nisha says to fight back but Jordan says he needs a chance so that he can beat him badly once and for all, and here he remember that Jordan has insulted him before as well. The next day he arrives with his sister Brin at school where Padgett was already waiting for him and then meets him where she tells him that they used to study in the same class before and says she needs a photographer in a car wash, but Cameron denies her and leaves.

Then Brin arrives and apologizes then they both leave on their way Padgett asks Brin about Cameron, where she tells that he likes to stay alone, he likes photography but he never shows anyone whatever he clicks, he likes old songs and katara movies and also tells that he likes horses as well. That’s why he works at a place where he can look after horses. So the next day she went there to ask him to teach her how to ride a horse, later they both went to school and she thanked him, then she invited them both to a party at Quinn where Nisha agrees and says she’ll bring Camron along with her.

At the party the next day they both were enjoying making fun of others and then Padgett meets them and says that she likes it. Then she sings which everyone likes a lot as well as Cameron, later he sings with her and they both sing well, this helped Padgett to gain her followers back. Then Nisha Cameron and Padgett go back altogether where Padgett says that he sings well and then she leaves for her house, she never tells anyone about her original house.

The next step she takes is to arrive at his house for the makeover of Brin and they go horse riding, then Padget works on changing him all over from his clothes to his hairstyles, and also she likes him. Then at the party, Cameron is the center of attraction, then they enjoy their time at the party Jordan tries to get her back but she says buzz off and continues her time with Cameron.

While Alden calls everyone for the cake cutting Brinn arrives and says that Jordan tried to take advantage of her, and finally Cameron gets his chance to fight with Jordan and he defeats Jordan repeatedly all this is going live as well. Then Cameron and Padget argue a bit saying he doesn’t know why she’s even talking to him and people are enjoying Jordan and her fight, and then leaves.

The next day she sees that she is viral on the internet again and Jessica praises her as well, everyone was cheering for Cameron at the school, then we see Jordan and Alden together, then Padgett understands the real reason why all this happens why she lost her followers and Alden planned to keep her life. Then Padgett and Camron clear their misunderstanding about the last night, then they go to Camron’s house and have a great moment together. He decides to ask her for the prom and at the car wash Padgett tells everything to Quinn, then Cameron arrives and proposes to her for prom and she says yes.

But then he knows the truth and leaves. On prom day, she was on voice mail where she apologies and her mother says it’s her fault. Now Padgett’s mother leaves for the prom and says her to hurry up and then she calls Brin where she was angry as well and Padgett apologies and ask for her help, later Brin comes to Camron and gives her clothes to wear for the prom and she says she misses her brother who used to be a happy person when their mom was alive and now he was happy with Padgett, he calms her down.

Padgett arrives at school and says to Alden that she won, on which Alden says she’ll be the prom queen, then they dances and the principal announces the prom king and queen who was Padgett then she shows her photos some good and some bad where she tells everyone that she’s trying to look good for some recent years but she’s not perfect and then talks about her mother.

Then she meets Quinn and Nisha where Nisha says that she has forgiven her and then Padgett leaves. Then she meets Cameron and he dances with her. A few days later Padgett and Cameron were roaming around in Portugal where she was living and told everything.

He’s All That- Wallpapers and Image

He’s All That official trailer 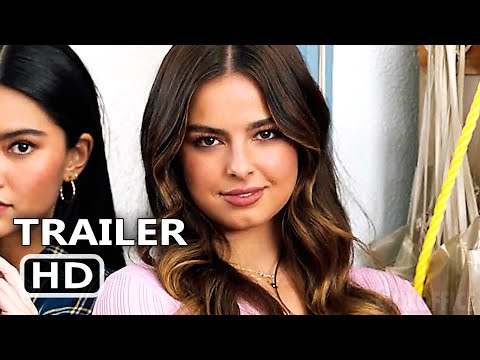 Summary of He’s All That Cast

He's All That Age Rating is TV-MA