The series was first premiered on June 12, 2020. Six days after its premiere, the series was renewed for a second season. Season 2 will premiere on December 10, 2021.

Several references to sexual acts include uncensored genitalia and breasts., s*x toys, and anatomical bits. Many of the characters modeled to resemble children’s playthings, mind cavort around fully “nude,” exposing their little painted bodies to viewers and sometimes engaging in full-on toy sex.

Full-frontal nudity and sex is clearly shown. However, since the figures are peg people, their genitalia and breasts are not realistic and therefore it is not as graphic.

Queen Tulip wants to have s*x with all of the squire candidates, and she makes it secretly a part of the contest. She has them all strip down to their undies (one doesn’t have any, and so we see his toy privates on full display), oils them up, and brings them back to her tent.

She, too, is completely naked (her wooden breasts protrude from her wooden body, and pubic hair is scrawled across the appropriate area), and she invites Patrick to have sex while hanging from a chandelier. She asks Patrick if he’s under 18: If he is, she insists, the encounter will be all the sweeter. Patrick tries to lie his way out of intimacy, telling her that he’s secretly a woman and pregnant to boot. That only fires up Tulip’s passions more. But when Patrick refuses the encounter, Tulip lets him leave. Later, we learn the rest of the contestants contracted a venereal disease.

We also see a bobblehead of the kingdom’s most famous prostitute (and hear that she spread another disease far and wide).

Patrick’s mother and father discuss getting intimate on a newly purchased pool table (and later we see shadows of the two having sex). Another segment of the contest features participants repeatedly hitting each other in the privates. And that’s just one of multiple gags that crudely deal with people being hit in the crotch.

Lots of medieval violence throughout, including sword penetration, stabbing, characters being crushed, and lots of stop motion blood & gore

Violence is less of an issue, despite it being fairly pervasive: You can kill and maim and dismantle peg figures all you want, and it still doesn’t pack the punch of even a 2005-era video game. But if the sight of toy blood bothers you, steer well away from this show. But for the very same reasons that the violence in Crossing Swords feels less extreme.

Patrick reluctantly joins his siblings in smashing dragon’s eggs in an attempt to find one filled with gold. After smashing several (much to Patrick’s horror), the siblings find a live baby dragon who claws the face of one of Patrick’s brothers and sends him bouncing down the mountainside. The mother dragon attacks the other siblings, and the melee eventually leads to several deaths and the immolation of a kitten orphanage. (We see a few dead kittens roll down the street.)

Drug use is common and sometimes pervasive. Alcohol and drinking is shown up constantly within the show.

Even worse, Patrick’s valor made him the black sheep in his family, and now his criminal siblings have returned to make his life hell. War, murder, full-frontal nudity—who knew brightly colored peg people led such exciting lives? 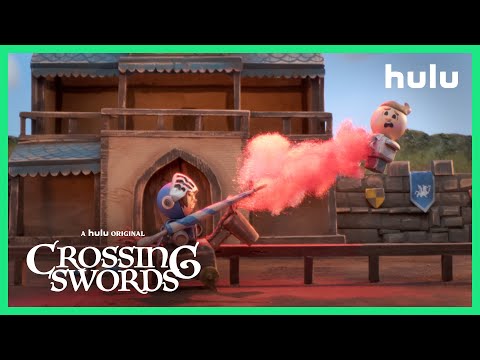 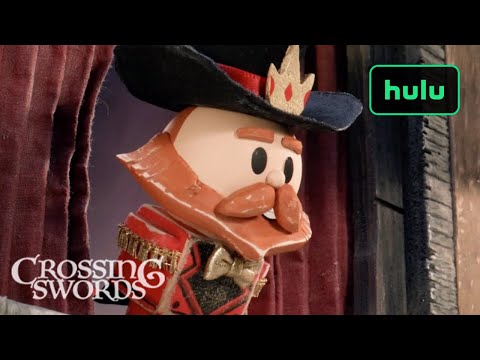