An American comedy television series Bunk’d is created by Pamela Eells O’Connell and produced byMike Montesano, Ted Zizik, Shari Tavey, Jason Shubb. The series was first premiered on Disney Channel on July 31, 2015. Season 5 is going to a season finale of the tv show.

Bunk’d rated TV-G for the content shown in the series. TV-G rating means that the program is generally suitable for the audience of all age groups.

To spend the summer at Camp Kikiwaka, Emma, Ravi, and Zuri leave New York City and head off to Moose Rump, Maine,  and there they meet their parents as teenagers. They all are trying to adjust in the camp, The camp has a notorious reputation of staying open despite violating various health codes and safety regulations.

Several cabins are destroyed by a fire in “We Didn’t Start the Fire“, it happens because a candle is left unattended. In “We Can’t Bear It“, the Ross children find the cabins that were never rebuilt because Gladys ran away with the insurance money.  Eventually, Emma, Ravi, and Zuri agree to sell the camp to Lou while they go pursue their dream jobs. Lou is now in charge of Camp Kikiwaka in “Who da Boss? Lou da Boss!“. While Lou gains Ava and Noah as fellow counselors, Destiny, Mateo, and Finn gain Gwen as a fellow camper.

“R.V. Having Fun Yet” episode of season 5 introduces a new character named Parker Preston, the great-grandson of Jedediah’s partner “Hatchet Joe” Preston who co-owned the Camp Kikiwaka in the past. Now Parker has arrived to become the co-owner and improve Camp Kikiwaka in appearance and camper attendance. 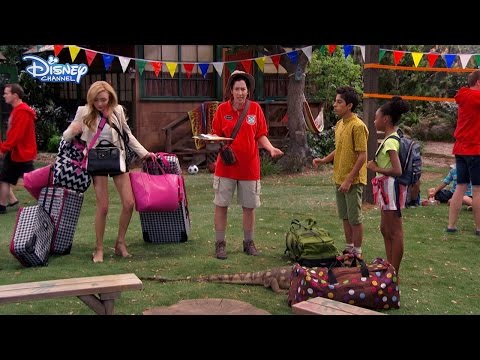 Just Have a Look
Bunk'd