Back to Life Parents Guide

Back to Life is a British dark comedy-drama television series written by Laura Solon, Daisy Haggard and directed by Christopher Sweeney. It is produced by Debbie Pisani.

The series is distributed by BBC, Showtime Networks. However, the production company is Two Brothers Pictures.

Back to Life Age Rating

TV-Series Back to Life is rated TV-MA for Very Strong Language and Alcohol Content.

Back to Life Parents Guide

Why TV-Series Back to Life is rated TV-MA ?

TV-Series Back to Life Release date

Season 2 of TV-Series Back to Life is scheduled to be released on 13 September 2021.

TV-Series Back to Life Overview

In this series, Miri Matteson has just been released from prison after 18 years. Moving back in with her parents, who live in a small seaside town, Mimi is attempting to start her life again.

However, there are two problems. The first is that the town has not forgotten what Mimi did all those years ago and the second is that Mimi, at least in some ways, hasn’t fully grown up since going to prison when she was 18 years old.

In season 1, the house is exactly the same and even her bedroom has remained untouched. So much so that the first thing Miri does is try to return an old cd Discman to her ex-boyfriend Dom, a now-married man with twins.

Time may have stopped for Miri but for everybody else, life has gone on without her. But undeterred, Miri tries to get on with life and just hopes that everybody will forget what happened.

Three weeks after we last saw her, and six weeks after leaving prison, Miri Matteson is optimistic about her future. Her probation officer, Janice, has gotten her a trial shift at the supermarket, she and her neighbor Billy have been spending more time together, and she has found her crimper.

Back to Life Wallpaper and Image

Back to Life Season 2 Official Trailer 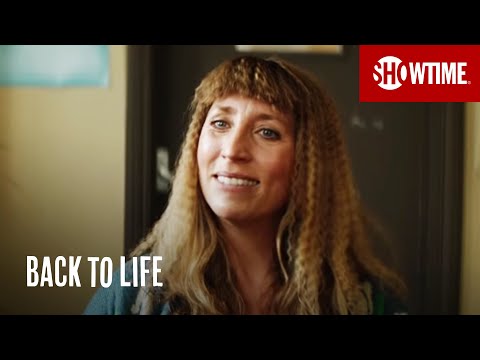 TV-Series Back to Life Cast

TV-Series Back to Life is rated TV-MA.