The Netflix Series Centaurworld Season 2 is releasing on 7 December 2021 on Netflix.

Centaurworld Netflix Series 2021
Note! If you already watched the Series, please inform us about the parental guidance here with your support, we can bring out a better vision to everyone

Centaurworld is an animal-centered twist on the familiar portal fantasy, where a character in a mundane world finds their way into a magical one. In its 10-episode first season, the show tries to mesh silly content and serious ideas, with varying results.

But the clever use of stylistic animation differences, as well as the unique approach to music for an animated show, makes it worth a watch — at least for viewers with a high tolerance for fart jokes.

Centaurworld follows a horse named Horse (Kimiko Glen), who falls through a magical rift that brings her to the brightly colored Centaurworld, a land full of half-human, half-animal hybrid creatures who frequently burst into song.

The centaurs aren’t just traditional half-horse, half-human creatures — they come in all sorts of animal varieties, like the tiny-eyed mole-taurs and lumbering bear-taurs.

The horse finds a herd of quirky creatures, led by pink llama-taur Wammawink (Megan Hilty), who decides to help her get home. In order to return to her war-torn medieval fantasy world, where humans battle against monsters, Horse needs to find different pieces of a magical key by traveling to different areas of Centaurworld and retrieving them from magical centaur leaders known as Shamans. 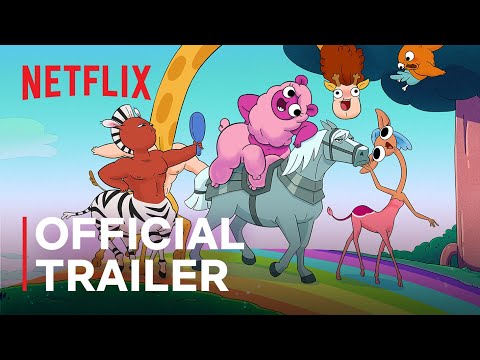